We analyzed over 9 million financial documents of 35,000+ companies globally for mentions of Trump and Obama during their respective campaigns. Here’s what we found:

(if you want to try running this analysis yourself – sign up for a free trial at sentieo.com)

We compared the number of documents in Sentieo Document Search with references to Trump and to Obama during their runs for presidency. Trump beats Obama by an impressive average of 6 documents with mentions to 1 (6 times more)!

Even after excluding documents with mentions related to Trump’s long-running history with public companies (which are unrelated to his successful presidential run), Trump is still ahead by a comfortable margin of 2-to-1.

President Trump’s momentum is so strong that he also beats by +15% the run-rate achieved by President Obama in the months following Obama’s re-election.  At the time, Obama mentions benefited from Obama already being in office and being involved in initiatives influencing the economy and captivating the market’s attention. This is therefore again an unusually strong level of attention generated by President Trump.

Takeaway 2 – The campaign evolved around 4 themes in 4 stages

Throughout the campaign, Trump has said many things but we found that he triggered 4 waves of worries and excitement which can be observed in the 4 chapters of the race leading to the inauguration. The graph below shows each sector as a share of the total number of references to Trump throughout the campaign. 5 sectors in particular stick out: 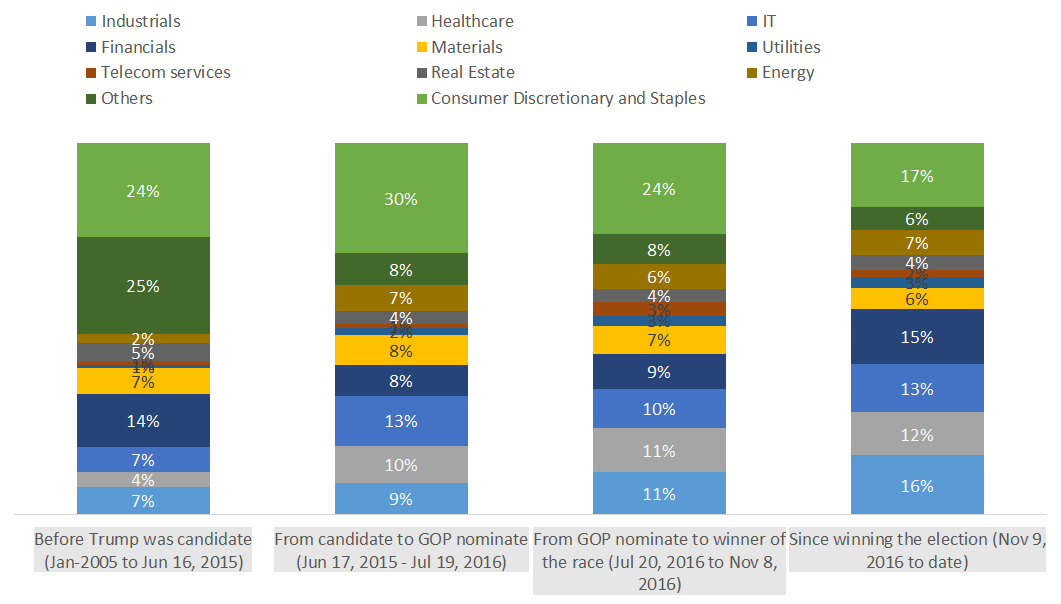 Takeaway 3 – where have all the controversial ideas of the early days gone?

The populist ideas used in the early days of the campaign to build traction has broadly disappeared from the document flow (for now…).  Long forgotten are the references to the Wall with Mexico (2 references out of 4317 documents since Election day), the registration of Muslim aliens (none), or the amendments to bank regulations to prohibit illegal aliens from sending money outside the US (no references to Section 326 of the Patriot Act—31 CFR 130.121).

The first few days in office have shown however that President Trump will make efforts to hold to at least some of these early promises. We therefore suspect that references to those will make a come back soon, especially as myriad corporations and industry leaders have now officially joined the public protests in voicing their frustration against the new hardened alien vetting programme.

We intend to circle back after the first 100 days with further analysis, so stay tuned for a follow-up post!

So, what issues were mentioned the most?

Our Methodology is based on statistical analysis provided by Sentieo Document Search. Sentieo Document Search is an extensive database of all the filings including 10-Ks, S-1s and 10-Qs, company press releases, presentations, transcripts and research reports from current and past public companies. In total, it currently holds 9.4 million documents (and growing). The search engine allows to split searches by sector, subsector, market cap and other financial metrics, and provides automatically results for synonym and related queries where relevant. In this study, we focused on Mr Donald J. Trump by adding “modifications” to a simple “Trump” query, in order to exclude references to his brother Robert, his ex-wife Ivanna, and his daughter Ivanka, all three regularly mentioned in financial documents which are irrelevant to Donald J. Trump. We also refined the results by excluding references which were exclusive to his properties (eg: Trump Plaza) and licensed products (eg: Trump Vodka) without mentioning at the same time Donald J. Trump himself.