Earlier this year, Elliott Management, a $31 billion activist hedge fund led by legendary manager Paul Singer, fought a long drawn out battle with Arconic, a metals engineering and manufacturing spinoff of aluminum giant Alcoa. Among the issues to arise from this fight was a particularly nasty corporate governance revelation about a hidden pension liability that takes effect upon a change in control.

At Sentieo, we watched from the sidelines with interest as the story developed, leaning on our indexed repository of public financial documents to uncover the material facts of this case. Our analysis revealed that potential “corporate governance risk” is a hidden aspect of equity investing that even sophisticated investors like multi-billion dollar hedge funds may not have adequate tools to assess.

Here are the facts (throughout the article below we’ve provided links to source documents in our Sentieo public document viewer):

On November 23, 2015, Elliott filed a 13D with the SEC which indicated that it had built a position of over 5% in Alcoa with the intention to influence the company’s management and board of directors.

On February 1, 2016, the company, still known as Alcoa, announced its intention to appoint three Elliott nominees to its board of directors. In November of 2016, the former Alcoa split into the new Alcoa, a pure-play aluminum producer, with the remains of the old company becoming Arconic, specializing in lightweight metals engineering and manufacturing for customers in aerospace and automotive.

Exactly one year later, Elliott Management published a letter to Arconic pointing out that their attempts to privately coax management into making improvements had not succeeded and they felt the need to move their arguments into public view.

This began an intense public battle between company management and the hedge fund, in which Elliott published letters, presentations and an entire website outlining the changes they wanted to see in the company to increase shareholder value. Arconic retaliated in kind with a surprise move to block Elliott’s efforts.

On April 12, 2017, Arconic (ARNC) filed an 8K which included an “Amendment And Restatement Of The Trust Agreement Between Mellon Bank N.A. and Alcoa Inc.” (note Wells Fargo Bank is the successor to Mellon Bank) dated September 24, 2007. This document showed that Arconic would take on a massive pension liability that would lower its value in the event of a “change in control.” The point?  Arconic clearly signaled that Elliott’s attempt to influence the company and nominate new independent directors could trigger such a “change in control” and therefore hurt shareholder value on the order of $500 million dollars. The move was deemed a poison put, after the common merger defense nicknamed poison pill, because it would cause the bring forward an outstanding liability and add significant cost to the company.

However, rather than sell their shares, Elliott Management filed a DFAN14A (a non-management proxy solicitation) the next day which highlighted that ARCN breached its fiduciary duty “by concealing it [the Trust Agreement] from shareholders until it was triggered,” likely in violation of federal securities laws.

Elliott noted that the potential liability was not disclosed:

3) In ARNC’s March 2017 Proxy Statement for its upcoming annual meeting.

We took Elliott’s check one step further and checked to see if the Master Trust Agreement was ever made public or mentioned in past ARNC/AA public filings. We found:

1) The “Amendment And Restatement Of The Trust Agreement” was not included in any September 24, 2007 public filing of Alcoa (AA);

3) The “Amendment And Restatement Of The Trust Agreement” was never included in an AA or ARNC public filing with the SEC prior to April 12, 2017;

4) On March 9, 2008, AA makes the first mention of an “amended and restated trust agreement” (change in language) and states: “The form of trust agreement is filed with the SEC and incorporated by reference as an exhibit to the registration statement of which this prospectus is a part”. There was only one reference in the 118 page document and no full exhibit.

5) On July 25, 2014 in an S3, AA makes reference to the “Amended and Restated Trust Agreement” (change in language) and has a blank page as Exhibit B which includes the title of the document but not the document itself.

6) In September and November 2016, AA / ARNC makes references to the “Amendment and Restatement of Trust Agreement” (changes in language) within “Rabbi Trusts” sections.

Are there additional hidden documents?

Not only did ARNC never publicly file the “Amendment And Restatement Of The Trust Agreement”, but ARNC also appears to have referenced the same document by at least 4 different names / titles:

1) Real name: “Amendment And Restatement Of the Trust Agreement”

Furthermore, two of the 8K filings reference documents with slightly different dates. Are those completely different documents and what additional risks exist which shareholders don’t know about?

In its April 13, 2017 letter Elliott states: “what other material facts did the company fail to disclose”. Indeed.

Our analysis indicates ARNC, and other public companies, could have skeletons in their closets that shareholders, proxy advisory firms, and corporate governance watchdogs are unaware of. This presents a potential risk for all investors that is poorly understood and hard to track down. One of our missions at Sentieo is to help investors, regulators and researchers find key data that has historically taken days or weeks (if sought out at all) in minutes, to make the best informed decisions possible.

Note: We ran “Click here to search the entire database” and found no results.

2. Search through ARNC filings for “Amendment and restatement of the trust agreement”

3. No Ticker Search “Amendment and restatement of the trust agreement” AND “Mellon Bank”

4. Search through AA and ARNC filings for “Amended and restated trust agreement” and found the first mention on March 9, 2008 highlights the document is only incorporated by reference: 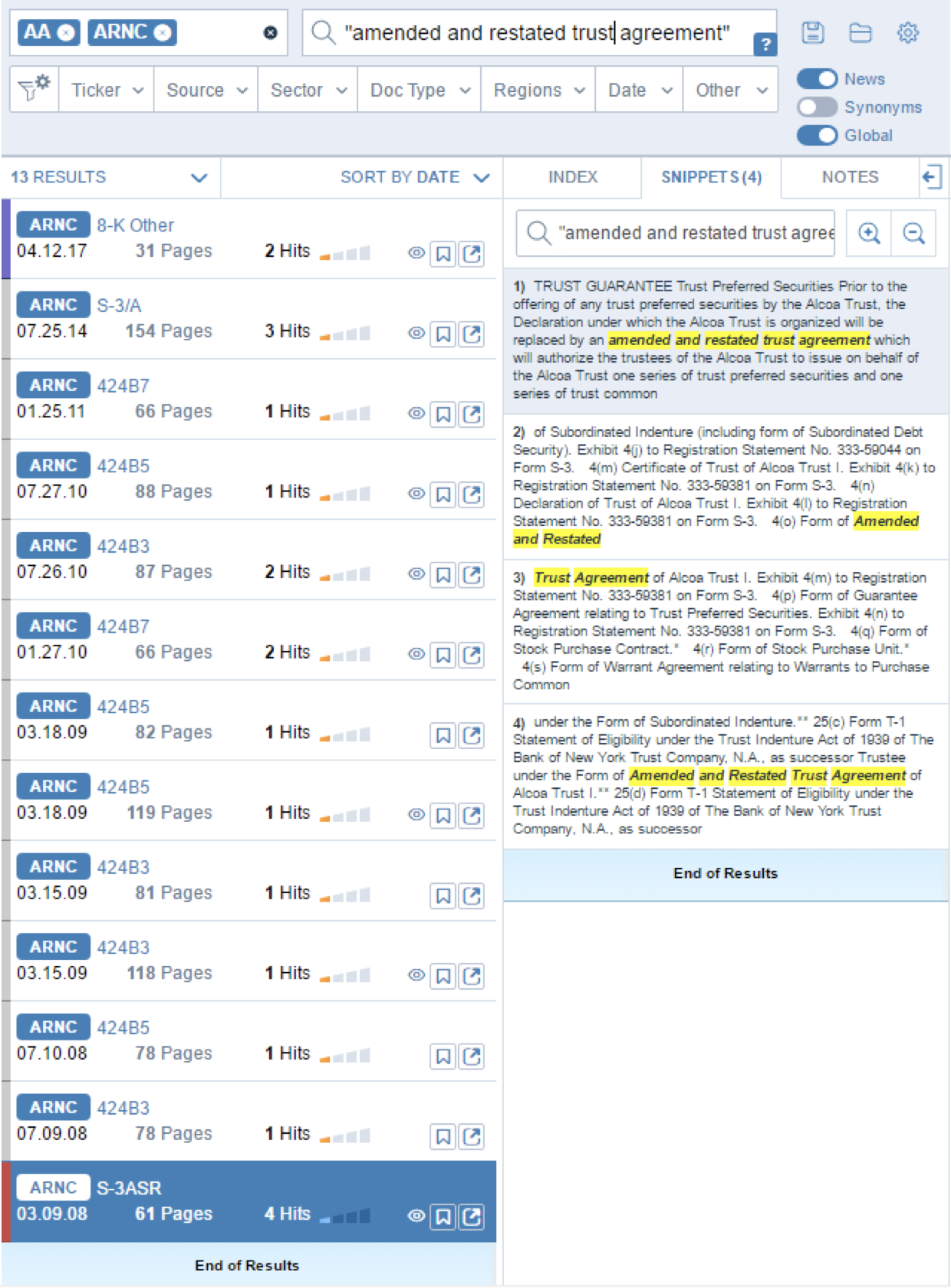 5. Searching AA and ARNC for Amended and Restated “Trust Agreement” AND Mellon Bank finds an S-3A filings from July 2014 which highlights the company did not include the Agreement within the publicly disclosed Annex. 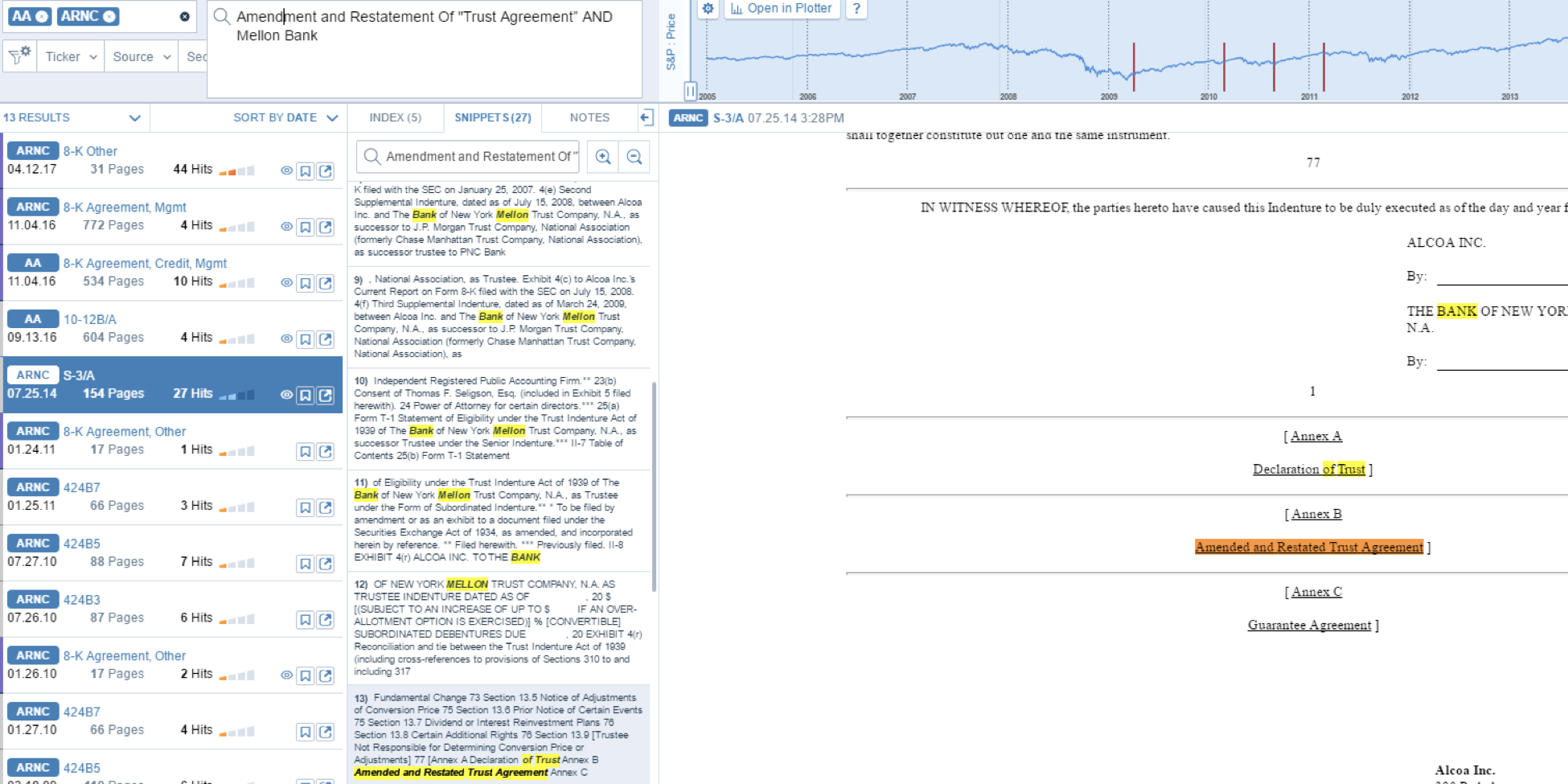 7. Searches for (Amended And Restated “Trust Agreement” AND “Mellon Bank) within AA and ARNC filings highlights two other references in 8Ks from January 26, 2010 and January 2011 which provide different amendment dates compared to the April 2017 document amendment dates.