For full transparency, we wanted to go through in detail our math on the subscription meal-kit industry, where all players are unlisted. This is where Mosaic starts to come in handy to estimate real numbers.

Guesstimating Blue Apron as the anchor

The latest delivery number for Blue Apron is 8 million meals/month (more than double the June 2015 rate of 3 million meals/month) That Fortune article equates it to a $960m run rate on an ASP of $10, but we are skeptical as customers never pay the full list price with the myriad referral bonuses and other promotions common in the business. We reckon the real number is closer to $9, which puts Blue Apron on a still-impressive $720m revenue run rate.

Hellofresh as the other end of the vector

We don’t know much about Plated and the other smaller players in the subscription kit space, but fortunately, they all run similar business models in the most transparent traffic market in the world. We used Mosaic to pull together three independent reads on Plated’s traffic and got extremely close results:

Using the market share data and known revenue numbers, we can put an estimate on Plated of about $135m in annual run rate:

This sounds in the ballpark considering it was pinned at $100m from this Inc article in June 2015. The closeness of fit of a linear curve shows that the revenues are strongly tied to traffic acquisition, but also that there is no clear barrier to entry or topline benefit to scale: 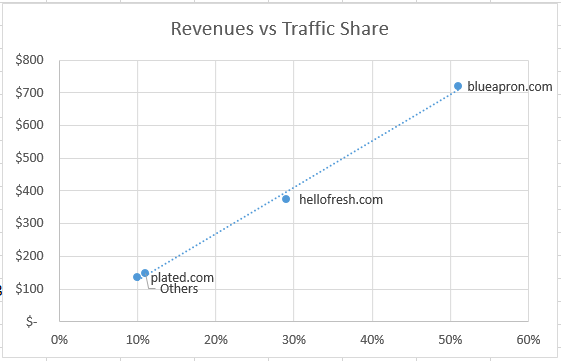 Getting a Handle on Industry Growth

So we now know that the industry is doing roughly $1.4bn/yr today but that number is meaningless in isolation because the rate of growth presents a constantly moving target, something traditional investors in retail and staples aren’t used to. We need get a handle on growth as well. Wouldn’t it be nice to have a platform where you could easily pull up that data from multiple sources? 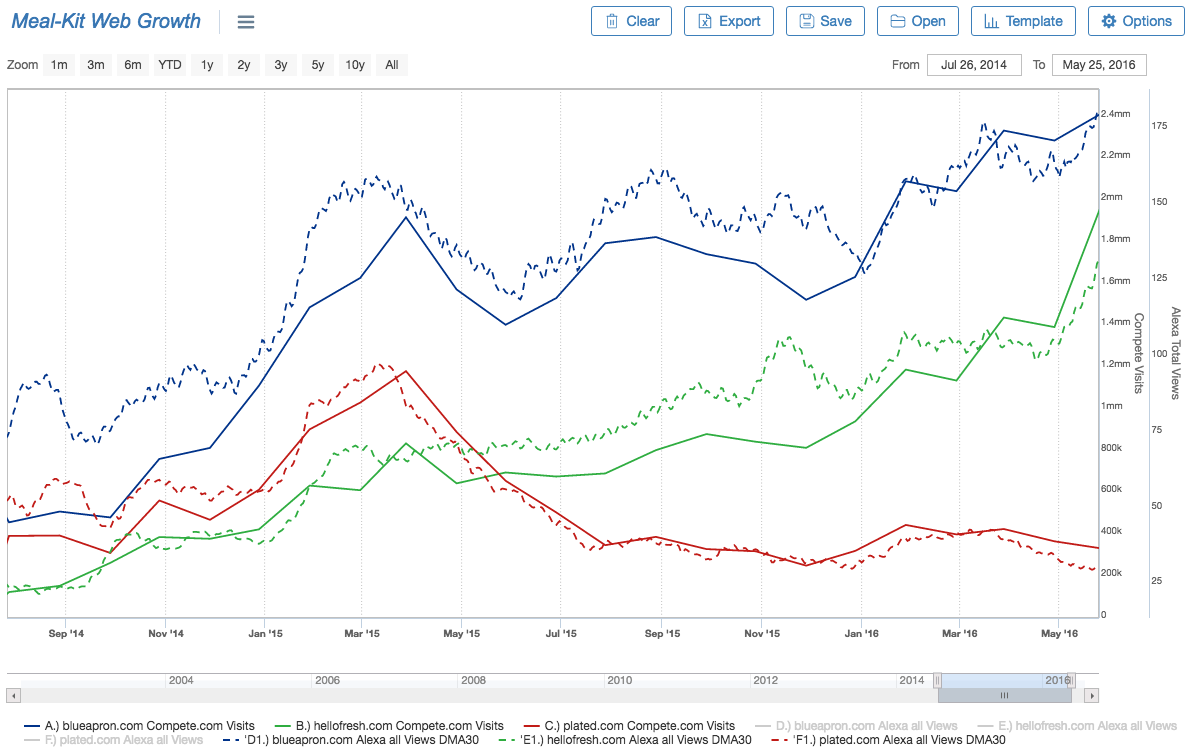 Plated’s March peak in traffic is a one-off bump thanks to their deal with Mark Cuban on Shark Tank, but we reckon that the industry has roughly doubled year-on-year, which means that there was at least $700m in incremental revenues over 2015, backend weighted. What is a reasonable estimate for forward projections?

Forecasting the future is more art than science. If the industry saw 100% growth in 2015, is it fair to say it will grow 100% again in 2016? On the one hand, you are starting off a higher base and are going from early adopters to followers. On the other hand, you have better funding and cash flow and scale in everything from customer base to marketing campaigns to logistics. It is hard to take the over/under. We think a fair conservative estimate is $800m in incremental revenues, which is a slight acceleration year on year in dollar terms but actually a sizable deceleration percentage-wise, to +60% forward growth. We think the risk to this number is higher rather than lower as more funding and entrants like Amazon come into the space.

Calculating the Comp Sensitivity for WFM

1% of WFM’s 2015 revenues of $15bn is $150m, and given that WFM is not closing stores in any meaningful scale, this is a directly applicable number to calculate impact on comparable store sales. Every $150m taken away from WFM is 1% less in comps.

However, WFM does not solely bear the brunt of the disruption. A number of WFM’s peers, from Kroger to Sprouts Farmers Market, have all called out or commented on the potential impact on subscription meal-kit services. While WFM is a major player, it would be unfair to attribute the full amount of the disruption to them. Since WFM is approximately 25% of grocery industry revenues, we think somewhere in that ballpark would be appropriate, though pricing and demographic characteristics make WFM more susceptible to disruption than the general industry.

Taking all of the above into consideration, we are able to stress test a simple model of WFM comp sensitivity to the subscription meal-kit services, which is how we finally arrive at our Comp Sensitivity table used in the main WFM blog post.