“If you want to be a millionaire, start with a billion dollars and launch a new airline,” Warren Buffett is fond of saying. The chronic bankruptcies and bailouts of the airline industries are widely known in the investment world – David Einhorn even did his undergraduate thesis on the topic which helped him start his investing career. However, you would not know it from the stocks – over the last five years, a quarterly rebalanced basket of major airline stocks have returned +450%, handily trouncing the S&P’s piddling +60%. Whitney Tilson put out a famous bull piece on the airline sector in 2014 summing up the zeitgeist: pricing is strong, planes are full, oil is cheap. Last week, Southwest $LUV printed record profit of $820m, up 35% year on year. Yet the stock tanked 11% on the guidance. What has changed in the airline sector and what could this mean for the rest of us?

The airline industry is a particularly data heavy sector to cover – the companies report monthly, and there are a plethora of metrics to stay on top of that may or may not matter. It can get extremely confusing for someone who just wants a 30,000 foot view (heh) of what is going on in the sector, but Sentieo enables extremely rapid modeling of KPIs using our Table Extractor features: 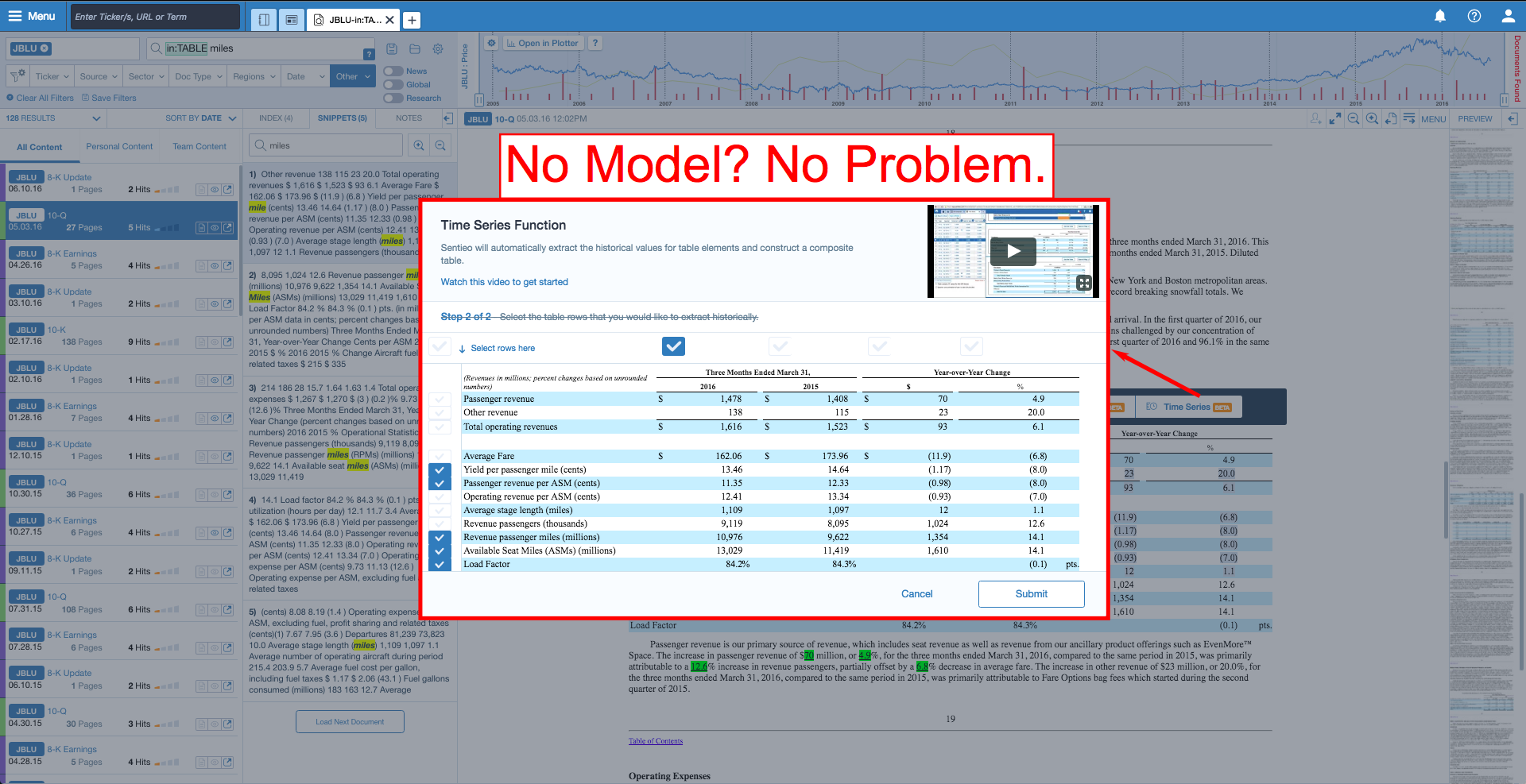 Sentieo users can contact us for tutorials on how to do this. In the rest of this article, we will be using consolidated numbers pulled directly from the company Q’s and K’s, as reported by them.

The airline industry’s worst kept secret is that demand is inelastic. If plane tickets are 20% cheaper, you don’t get 20% more people flying. Whether for business or pleasure, there are simply more constraints to ticket demand than simple price. With high capex requirements, fixed labor and airfare/route costs, output (and many core costs) are essentially fixed in the short term. To add fuel to the flame, outputs are batched – a single plane carrying hundreds of passengers has to leave no matter if it is at breakeven Load Factor or not. Once a flight is scheduled, the marginal cost of adding one more passenger is close to zero, so there is abundant incentive to sell another ticket for whatever incremental revenue it can bring. In isolation, dropping prices to sell the incremental ticket makes perfect sense. But if the industry as a whole is in oversupply, this behavior destroys industry pricing with insufficient increase in demand.

So the health of the airline industry largely depends on “price discipline”, the gentleman’s term for implicit collusion. This bears strong analogies to the cartel of oil producing countries – and the analogy extends to recent events. Partially thanks to a breakdown in discipline in the oil cartel, oil prices declined dramatically in 2015, and now it seems airline pricing is following suit:

Spirit ($SAVE) is a relatively marginal player so their pricing behavior is not in itself a problem, but the broader decline in industry PRASM guidance from large players like Southwest is. Searching our platform for $LUV “guidance” includes synonyms like “outlook“, which throws up the RASM decline number: 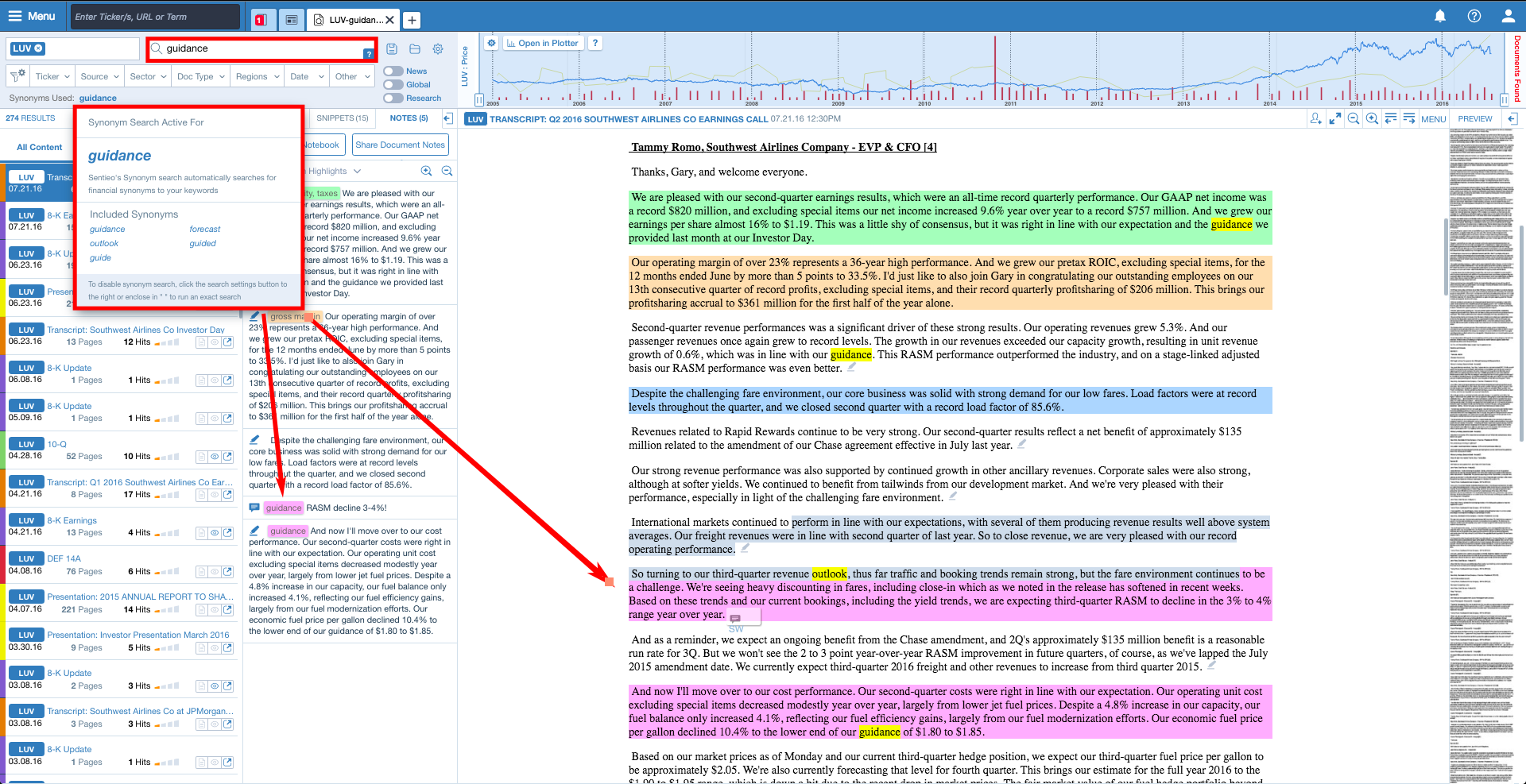 Jamie Baker, JPM: You’ve got weak PRASM. As Tammy pointed out, you’ve got load factors at record highs. You’ve inflicted a pretty sizable fuel headwind on yourselves. And you’re guiding to a year-on-year earnings decline. So why do you routinely ignore initiatives, industry initiatives intended to restore pricing stability? Or put differently, why does Southwest potentially choose to be part of the problem instead of part of the solution?

The CEO declined to answer. The fact is they don’t even see the problem: even while peers are acting in good faith, there is literally no situation under which Southwest can imagine itself cutting capacity:

Hunter Keay, Wolfe Research: Is there a scenario where you see Southwest growing capacity less than GDP next year?

Gary Kelly, Southwest CEO: Well, that would be hard to do…

Andrew Didora, BofA Merrill Lynch: I guess, you mentioned in your remarks that you have not gotten to a scenario where taking capacity out is profit accretive. I guess how much further would unit revenues have to fall in order for capacity reductions to make sense?

Gary Kelly, Southwest CEO: I’m sorry, I can’t do that math in my head… we looked at some fourth-quarter capacity changes that we could make, and none of those looked productive to us.

There are real reasons for why Gary Kelly is unused to this kind of math: he was CFO for 15 years under Herb Kelleher and was  responsible for years of hedging profits on fuel that drove much of Southwest’s profitability in the early noughties, earning him a Best CEO in America title for 3 years running. This is a man whose career was built in no small part due to hedging fuel aggressively. So it is no surprise what happened when oil prices tanked:

RPMs are negative, Airlines still think adding ASMs is the way to go

The truth is, in refusing to cut back capacity, Gary Kelly is well aware what he is doing to the industry. He also knows that if he doesn’t do it, someone else will, and it might as well be him. The growth of both incumbents and insurgents in this economic cycle has been unprecedented – and one way to visualize that is in ASMs vs RPMs:

We can also pull the time series of Loading Factors, however it is hard to aggregate those across different sizes of airlines. One way Sentieo makes Time Series analysis a breeze is with our Hybrid Series feature – which makes all the time series alignment functions previously the preserve of Python and Matlab programmers, into intuitive GUI-based manipulation. As it happens, this is perfect for studying trends at an industry level: 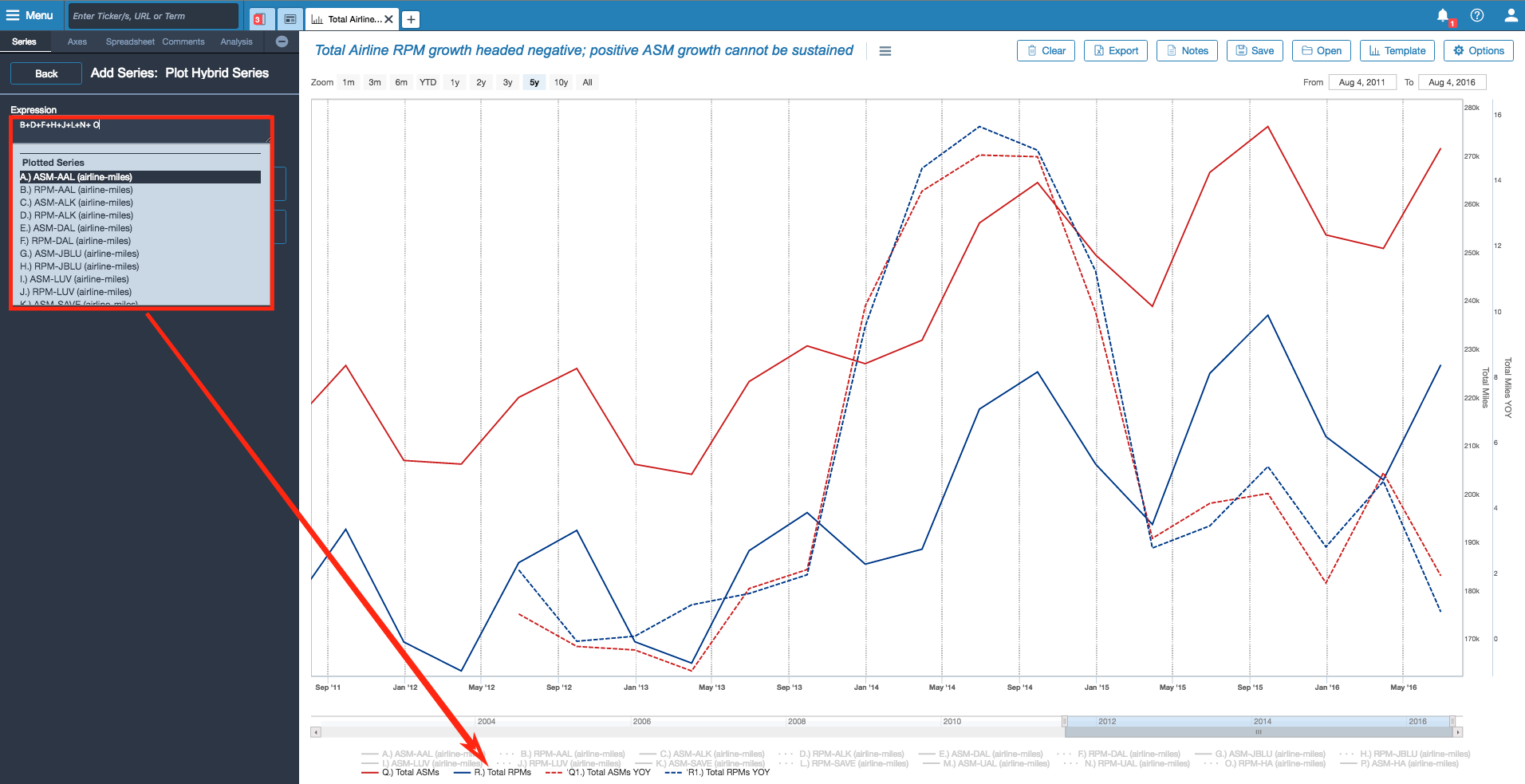 The math is simple and powerful – as long as RPMs grow slower than ASMs, industry Load Factors will be in secular decline. And here is the crux of the issue for the airline sector – supply has to keep in line with slowing demand growth. The airlines have to start acknowledging the problem to deal with the problem, but you wouldn’t know it from two key items of their spending – employees and capex:

JetBlue’s earnings today will round out reporting season for major American airlines, but to a large extent we now have a very clear picture of where we are in the airline cycle. There are critical downstream implications for those exposed to, in order, airline pricing, airline MRO, and airline capex, and of course the sector is a highly attuned leading indicator of the broader macroeconomy. We will spare you the gratuitous document search for companies that might be affected by slowdowns in airline spending, but we think readers might find technology platform $TVPT, booking provider $SABR, and servicer/component manufacturer $TDG interesting along with the usual travel plays like $EXPE and $PCLN.

We feel it wouldn’t be appropriate to end an airline post without coming back to a classic Buffett reminder on the prospect of airline investing:

If a capitalist had been present at Kitty Hawk back in the early 1900s, he should have shot Orville Wright. He would have saved his progeny money. But seriously, the airline business has been extraordinary. It has eaten up capital over the past century like almost no other business because people seem to keep coming back to it and putting fresh money in. I have an 800 number now that I call if I get the urge to buy an airline stock. I call at 2 in the morning and I say: ‘My name is Warren, and I’m an aeroholic.’ And then they talk me down.