We take a break from our regular programming to talk big picture. No snarky earnings comments, no self-promotional charts, no Rebecca Black, just real talk: The future of work is a topic very near and dear to our hearts. At Sentieo we belong to the Slack generation, and we find no better joy in our jobs than in seeing the very real way we are helping our users, large and small, both work with better tools and work better with people. Atlassian is one of the greatest SaaS success stories of all time; better commentators than us have described their growth in far more breathless superlatives, from Fortune to Bloomberg to VCs. Here they are in their own words, fresh out of IPO:

Now at a $6bn market cap (9.3x sales, 45x ebitda, on universally bullish street estimates), short-term investors have to contend with an admittedly rich multiple relative , without doubt, get this out of the way right now: there is without doubt some point in the future you will be able to purchase $TEAM for cheaper than today. Expectations for the print on Thursday are very high, partially due to high visibility company guidance. And thanks to the epic 30% run up into earnings, the company has to guide very aggressively for 2017 to surprise on the upside. If that is all you care about, the pages of the Motley Fool welcome you.

The stock will wax and wane with hairline percentage point differences in results, but also appetite for growth. As surely as we are in a conducive environment for growth right now, we will also inevitably revert to a risk off situation where growth will be seriously questioned and can be bought at cheaper multiples. There are plenty of ways and plenty of stocks with which to hedge that risk. Beta, and more generally style factor risk, is not a valid criticism for sophisticated investors.

Fortunately, the company’s superior product development and organic growth has never been guided by its private or public market valuation. Our focus for Atlassian is not in handicapping what the stock price will be next year, nor whether its a better buy at $29 or at $25, but rather what its fundamentally different business model and strategy could imply for the company in 10 years. Can the company realistically 10x its revenues? 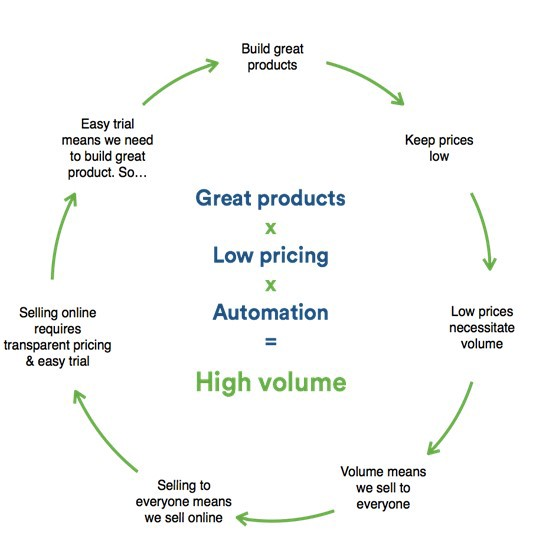 It is too trite to compare Atlassian’s current 57,000 customers to their goal of “selling to the Fortune 500,000” and call it a 10X-er if they reach their goals. Let’s think about how it could actually get there.

We did a survey a few years ago and found out that about a third of the use cases actually were not on the software teams, but they were actually in IT doing IT help desk. So, in the fall, we segmented our product JIRA into really three offerings… we believe that all organizations provide service inside an enterprise. So, if it’s purchasing, they’re providing some services. In HR, on-boarding an employee, making sure that the new employee’s got a place to sit and the right chair and they’ve got the right computer. And then they need a credit card or something like that for travel, that kind of — the on-boarding of an employee. So, that’s another service desk. HR, purchasing, legal, finance all have service desks. And so, we think that’s a big opportunity, and that was important as part of the segmentation. And lastly, we came out with JIRA Core, which is a product really sort of designed for that HR or finance, legal, marketing organization that’s going to be doing projects together and doesn’t have some of the software terminology that the previous JIRA product did. You can get that in JIRA Software today, but the JIRA Core is really tailored to the non software IT user.

Atlassian has proven success at all of the above, but we are most encouraged by what they have continued to do post IPO. On July 14 they acquired StatusPage, a very young startup that they were early adopters of. The acquisition not only serves all existing Atlassian customers, but opens up the flywheel in a completely new way – the Status Page is a fundamentally outward facing part of an organization and gives a venue for Atlassian to reach even more users by simply reaching users of its users. It is very early days, but we are excited.

Worth More To Others

At the risk of drowning in the Kool-Aid (this is far too soon after IPO), the main way Atlassian does not 10x is if it gets acquired by far larger legacy Enterprise Tech companies that have more cash sitting around than Atlassian is currently worth. Microsoft investors didn’t blink at spending $26bn to have the data to reach professional users. We think Atlassian’s existing suite of products, price points, and customers will be decently differentiated, yet additive, to a Microsoft or a Salesforce. Given current cashflow, Atlassian will deal on its terms, its schedule, and no one else’s.