As 10Ks get longer and more complex, it gets harder and harder to find the material financial information within them. In fact, the average number of pages in a 10K has grown almost 34% over the past 8 years. We used Sentieo data to create the graph that shows this increase below.

The HBS finance paper Lazy Prices shows that this rich information is hidden in 10Ks and investors are missing it (or at least taking their time incorporating it into stock prices).

The HBS paper explains how:

Changes to the language and construction of financial reports also have strong implications for firms’ future returns: a portfolio that shorts “changers” and buys “non-changers” earns up to 188 basis points in monthly alphas (over 22% per year) in the future. Changes in language referring to the executive (CEO and CFO) team, regarding litigation, or in the risk factor section of the documents are especially informative for future returns. We show that changes to the 10-Ks predict future earnings, profitability, future news announcements, and even future firm-level bankruptcies.

Finding changes across 10Ks seems like a time-consuming chore. However, with a redlining tool like Sentieo, you can see these changes in seconds. Let’s use the same example that the authors used in the report: bioscience/medical product company Baxter International (BAX). Follow this two-step process:

See the 10k below, after we applied Sentieo redlining. As the HBS report discusses, mentions of the words, “scrutiny,” “regulatory,” “laws and standards governing” were added to this 10k when compared with the one from the previous year. The purple text shows new language: 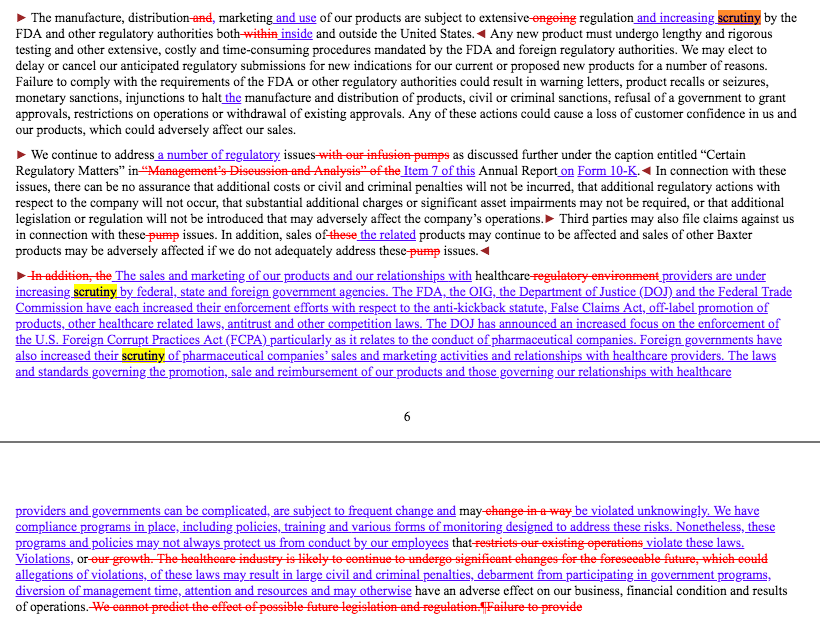 Many news headlines flooded the media in the months following this 10K’s release in 2010, possibly resulting from the addition of these more regulatory-related and overall more negative words to the 10K. The HBS report explains this in more detail, including the fact that the stock price ultimately plummeted as a result:

For instance, a New York Times article published on April 24, 2010 reported that the FDA was clamping down on medical devices – in particular, on automated IV pumps used to deliver food and drugs. From the article: “The biggest makers of infusion pumps include Baxter Healthcare of Deerfield, Ill.; Hospira of Lake Forest, Ill.; and CareFusion of San Diego.” The article went on to quote an FDA official commenting that the new, tighter regulations would slow down the FDA approval process for automated pumps. Then, on May 4th (just 10 days later) the New York Times reported that the FDA had imposed a large recall on Baxter: “Baxter International is recalling its Colleague infusion pumps from the American market under an agreement with federal regulators that sought to fix problems like battery failures and software errors.” Moreover, the stock returns of Baxter International moved substantially surrounding the New York Times articles. In the two-week period around the articles, Baxter’s price burned down more than -20%…the price remained depressed, not reverting over the subsequent 6-month period. In contrast, we see no significant reaction to Baxter’s own disclosure of its 10-K on February 23, 2010, nearly two months before the news articles were published.

Looking at the stock price over time using Sentieo Plotter, one can see the drastic dip in 2010 after the 10K was released in February. 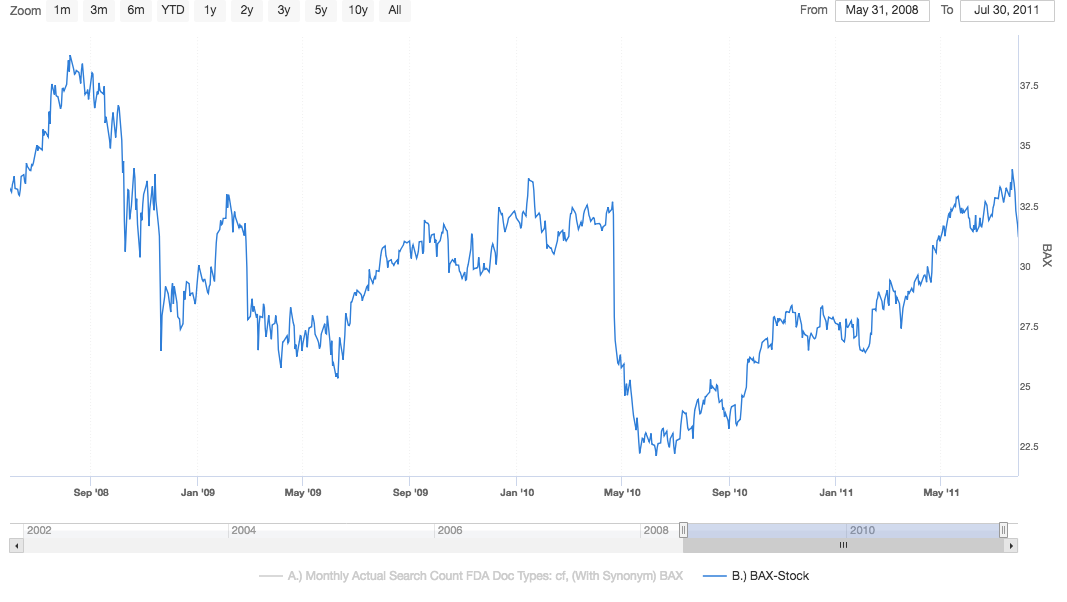 We first show that firms that change their reports experience significantly lower future stock returns. In particular, a portfolio that goes long “non-changers” and short “changers” earns a statistically significant 34-58 basis points per month – up to 7% per year (t=3.90) – in value-weighted abnormal returns over the following year. These returns continue to accrue out to 18 months, and do not reverse, implying that far from overreaction, these changes imply true, fundamental information for firms that only gets gradually incorporated into asset prices in the months after the reporting change. As all publicly traded firms are mandated to file 10-Ks (and 10-qs), the sample over which we show these abnormal returns is truly the universe of firms (not a small, illiquid or otherwise selected subset).

The importance of following 10K language changes — and using a redlining tool to quickly spot them — is clear. Seeing these linguistic clues ahead of time can help you predict the direction a price will move.