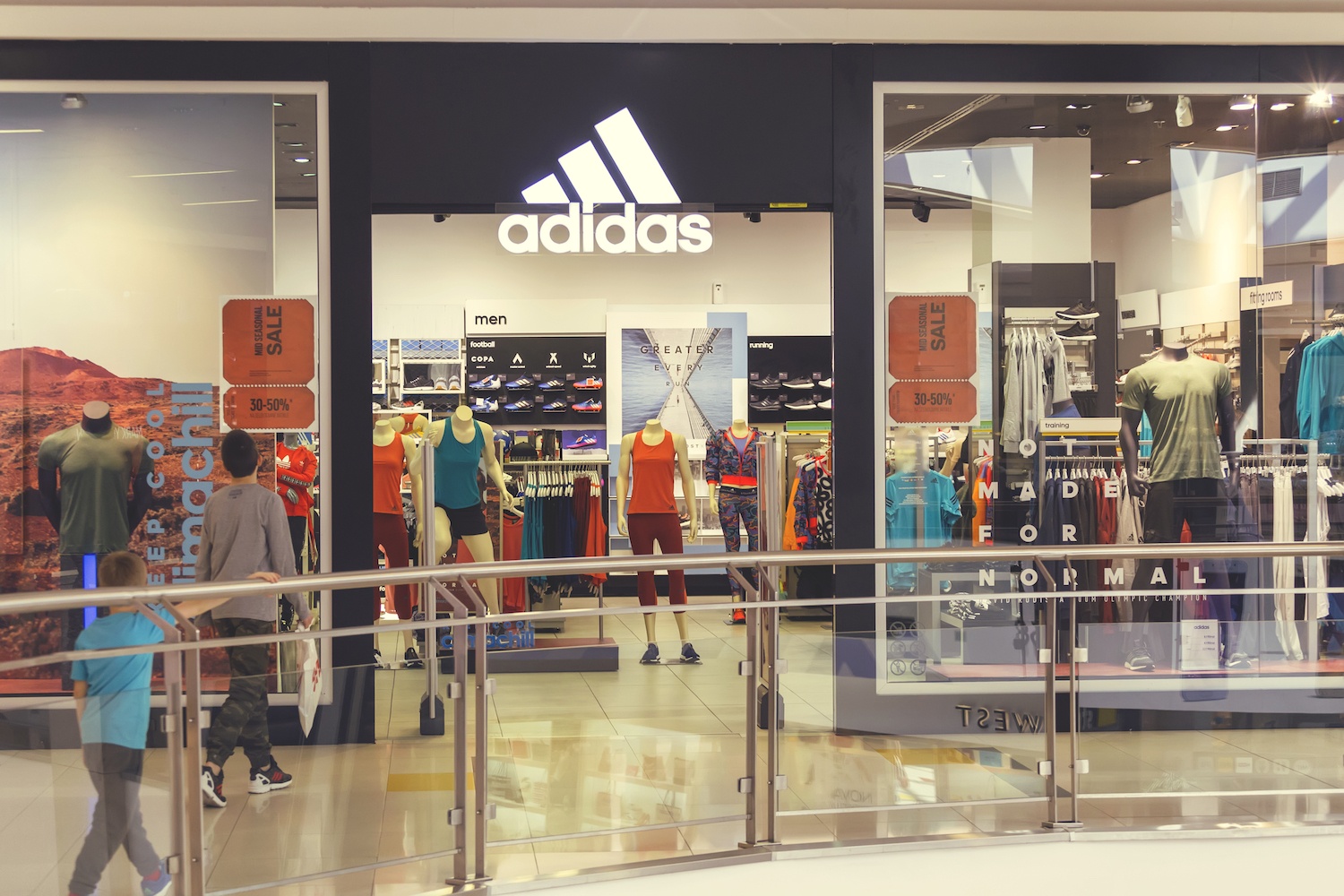 The global sports industry is huge, estimated to be around $1.3 trillion. Within sports, the sportswear market is a great place for investors looking at strong brands in a large and growing market.

Recently, the sportswear industry has seen a rise in promotions and discounting activity, as have other segments of the retail industry. A combination of factors such as a decline in tourist spending, slowing foot traffic and a negative consumer spending environment has affected the majority of companies in the space, limiting their growth potential and pricing power. These headwinds, together with the companies’ aggressive expansion plans and excess inventories (as is the case for Under Armour and, in part, Nike), has triggered a rise in promotional activity by many players.

In order to understand the current status of inventories in the industry and to verify the balance between supply and demand, it’s necessary to understand how promotional activity is evolving.

Sentieo’s Mosaic product allows investors to get a clearer idea of how promotional activity is evolving in the sportswear and athletic footwear markets by looking at alternative data, giving analysts a view into the current sources of pressure on gross margin.

Using Twitter Mentions, we can build queries to track the number of mentions of any word or combination of words. Twitter is one of the most important social media networks for businesses, and every brand and third-party retailer in the sportswear and athletic footwear industry promotes on the platform. Let’s go directly into the chart below to see how Nike’s promotional activity has evolved over the past three years. 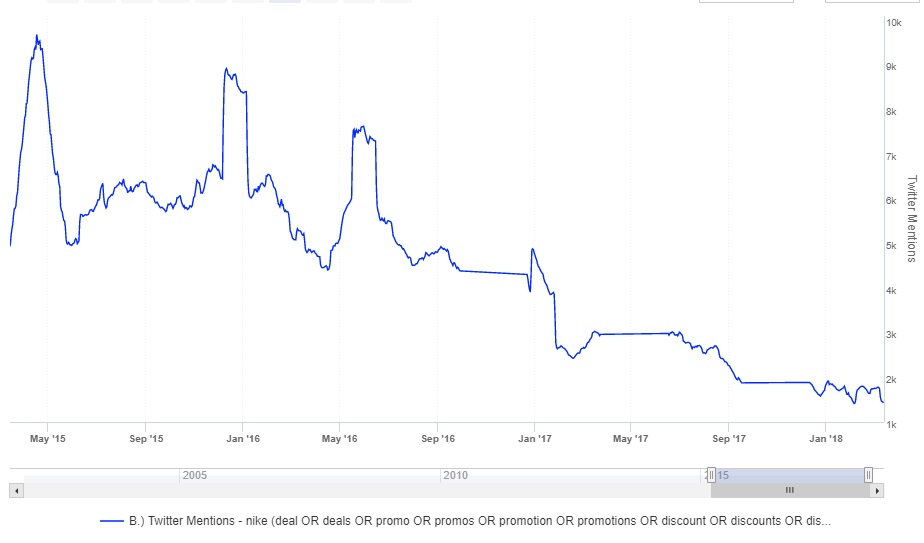 The chart shows the 30-day moving average for the number of Twitter mentions for promotional activity, including phrases such as “Nike discount,” “Nike 30% off,” “Nike clearance,” and so on. We can see that promotional activity was particularly intense between 2015 and 2016, but declined substantially in more recent times. It has been very slow since the beginning of 2018, reaching a four-year low.

Now that we have an idea of how Nike’s promotional activity has trended, let’s look at Adidas. Adidas is Nike’s main competitor, and its successful expansion strategy for the past few years has diminished Nike’s market share and created more opportunity for other smaller competitors. It has limited the American giant’s growth both internationally and in the domestic market. As we can see in the chart below, Adidas’ discounting mentions were lower during the high-growth phase between 2015 and 2016, while Nike was facing strong competitive pressures and engaged in more aggressive promotion. The situation has changed in the recent past, with Adidas’ promotional activity increasing significantly in 2017 and remaining a bit higher than it was in 2015/2016. 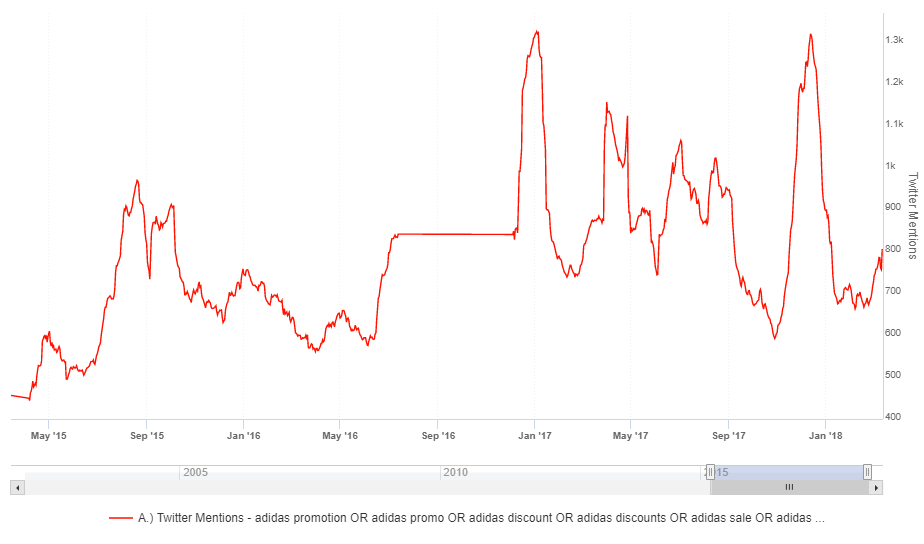 The data clearly shows that the situation has reversed in comparison to last year, and the Adidas brand, for one reason or another, has shown an increase in promotional activity, while Nike has moved in the opposite direction.

Let’s look at another interesting name in the industry: Under Armour. Under Armor has enjoyed years of aggressive expansion with revenue growth rates around 27%-32%, some of which can be attributed to the increasing popularity of its endorser, basketball star Stephen Curry. However, the growth rate plummeted from 21.8% in 2016 to just a bit above 3% in 2017.

Under Armour’s aggressive expansion plans backfired and a strong imbalance between supply and demand generated a steep increase in inventory levels, which reached 23.3% of revenue at the end of 2017, compared with 19.7% in 2015 and 17.4% in 2014. It shouldn’t be a surprise that promotional activity skyrocketed in the second half of 2017, which was a necessary response to the alarming rate of inventory build-up. The chart below shows that mentions of promotional activity reached a historical high in December 2017. 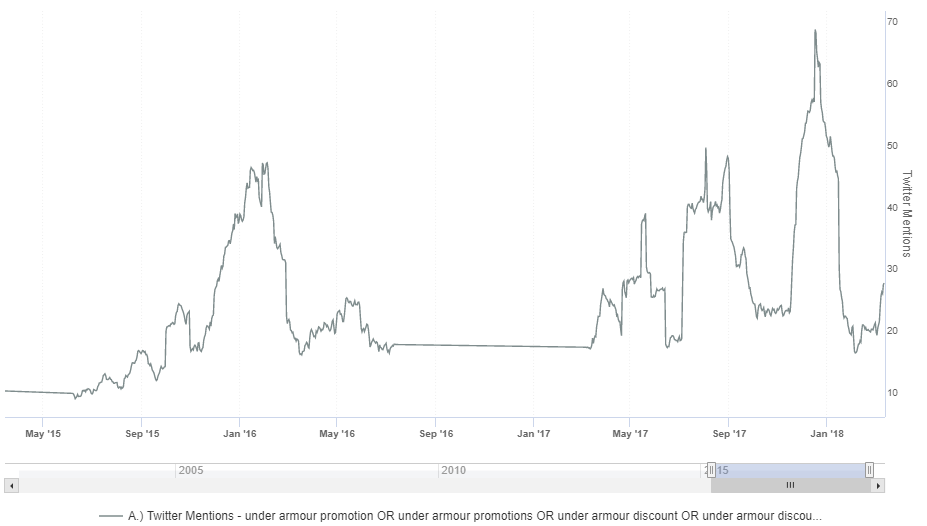 Sentieo’s alternative datasets have allowed us a unique view into key industry dynamics like promotional activity, one of the primary drivers of margin pressure in the sportswear industry.

Investors and analysts should take these insights into account when they assess the attractiveness of the aforementioned stocks; datasets like Twitter mentions can definitely shed light on the probable direction of margins.

While we were looking at promotions, we looked at alternative data to forecast Nike’s next quarter using Google Search Trends data. Google Trends tends to lag Nike’s revenue growth by about a quarter and recent trends seem to indicate that they make not make the growth target for next quarter. It’s still early, however, and the most recent month of data has not fully come in yet.